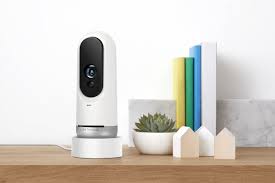 The Perfect Security Camera For Surveilling Your Own Family?

This new camera isn’t just for security. It’s also a way to catalog every move.

To paraphrase former Google chairman Eric Schmidt, Lighthouse is the kind of tech product that gets right up to the creepy line.

Ostensibly, it’s an indoor security camera. Place it in a highly trafficked part of your house, and you can use a smartphone to receive activity alerts and view live camera footage from anywhere. It even has a 3D depth sensor to help distinguish between people, pets, children, and shadows; you’ll only get nagged when a burglar really shows up.

But Lighthouse, which begins shipping today for $300 (or $500 with lifetime service that normally costs $10 per month), is designed for more than just security. With facial recognition, object tracking, and a voice assistant built into its mobile app, the camera can act as your personal home informant. Want an alert for when the dog walker shows up late, or when the kids break curfew? How about one for when your spouse comes home with an unrecognized visitor? Lighthouse’s hardware and software make this kind of home surveillance easier. It’s all useful in practice, but a little unnerving in principle.

ALL IN THE SENSES

Lighthouse isn’t the only security camera that tries to recognize what it’s looking at. The Netatmo Welcome, Arcsoft Simplicam, and Nest Cam IQ all offer facial recognition features, and Amazon’s Cloud Cam also tries to discern between people and other things.

The difference with Lighthouse is in its sensors and software. Currently, it’s the only camera with a “time of flight” sensor, which builds a 3D map of the room by sending out diffuse light and timing reflections back to the camera. This helps Lighthouse identify moving objects and screen out things that shouldn’t trigger a security alert, such as pets and lighting changes. (I don’t have any pets with which to test this, but Lighthouse never alerted me to movement that didn’t involve humans.)

The depth sensor can also detect specific gestures and actions, though Lighthouse only supports a few for now. Waving at the camera can send an alert to other users by phone, letting them start a two-way audio chat. The camera can also figure out when kids are running around, or when a dog is jumping, which can make for some amusing highlight reels.Facial recognition is less novel, at least in terms of accuracy. Like other cameras, Lighthouse takes snapshots whenever it sees a face, building profiles that become more accurate over time. The company says it generally needs two weeks of use to get reliable data, which is similar to other cameras, and that proved true in my experience. A week after setting up the camera, Lighthouse still didn’t recognize me every time I walked through the door, despite having manually tagged myself in about two dozen snapshots beyond the ones Lighthouse recognized on its own.

Still, Lighthouse’s software goes a step further than other cameras with the face data it compiles. Inside its mobile app, a voice assistant helps you review footage from specific timeframes and set up alerts without having to sift through menus. The assistant supports all kinds of custom parameters, such as when someone shows up in a certain time period, with specific people, or with people the camera doesn’t recognize. You can have some alerts go off when you’re already at home, and some go off when you’re not. And if you just want to review the day’s footage, Lighthouse presents a time-lapse that slows down whenever people are in the picture.

We didn’t have a lot of visitors during my time with Lighthouse, but when people did come by, I felt an obligation to point out the camera and explain how it worked. This is arguably good etiquette with any security camera, but it felt like a necessity with Lighthouse given that it was quietly building profiles of everyone’s faces and storing them in the cloud.

From a data security standpoint, Lighthouse offers plenty of assurances. The company uses “bank-grade” TLS encryption for every connection, and a method called “key stretching” to protect users’ passwords. Video gets wiped after 30 days, and while Lighthouse keeps face information in perpetuity, the company says it’ll never look at users’ data. (One exception: You can report misidentified faces to have a “trained AI expert” look over the relevant video.)

Even so, Lighthouse is going a step further with data hoarding than the other connected devices we’ve been letting into our homes. Smart speakers like the Amazon Echo and Google Home don’t upload a continuous audio feed in search of useful tidbits. Instead, they listen for specific wake phrases to ensure they’re taking only what they need. Other connected cameras do upload continuous video feeds, but in years past the intention was around home security, and ensuring that law enforcement could access footage of criminal activity.

By comparison, Lighthouse is creating a searchable database of everything that happens under its watch, and it’s using this information to push beyond home security. While the camera does offer a Privacy Mode that can stop recording when users who’ve installed the app are nearby, this nullifies the presence detection on which Lighthouse is staking its business: “Our ultimate vision for Lighthouse is to provide useful and accessible intelligence for all physical spaces,” the company says in today’s blog post.

A lot of good can come from that vision. Today, for instance, Lighthouse can tell you that your kids are home safe from school, or show that your dog has been acting strangely when you’re not around. It can also quietly capture some magic moments, like the bout of play fighting that broke out between my four-year-old son and myself after dinner last week. When IFTTT integration arrives later this year, Lighthouse’s presence detection could help accurately control smart lights, speakers, thermostats, and other connected devices. Someday, its motion recognition could tell you if an elderly family member is on the ground and immobile.

Still I can’t shake the notion that Lighthouse’s observational superpowers come at a cost, whether it’s the ability to bypass actual conversations, the intangible feeling of being watched in your own home, or the power to watch others when they think they’re in a private place. Lighthouse’s ability to detect presence has plenty of potential, but in the same way that smart speakers know when not to listen, a better version of Lighthouse would know when to turn off the camera.