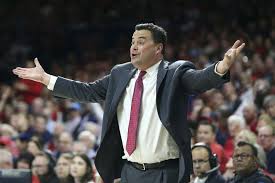 Arizona Wildcats basketball fans have experienced several emotions over the past couple days, including disbelief, anger and sadness. This is all due to the alleged involvement of UA head coach Sean Miller discussing a payment of $100,000 to earn a commitment from freshman center Deandre Ayton.

What is going on, how did this all come about, what is going to happen to Arizona and Miller, and what does it all mean legally?

What is going on?

It has been reported, although not yet proven, that Miller was recorded on an FBI wiretap talking about paying for Ayton to play for the Wildcats. Allegedly, the FBI has evidence — obtained with the use of a wiretap — of a discussion between Christopher Dawkins, who worked for NBA agent Andy Miller, and Miller about paying for Ayton.

Let me caution you: the FBI has not yet confirmed the conversation. It is triple hearsay, so to speak. This is a conversation allegedly heard by sources, who then told a reporter, who then wrote a story.

This type of discussion may come as no surprise to you. We all know this shady stuff happens, right? We enjoy the benefits and we look the other way. After all, if everyone is doing it, then is it really cheating? In this case, yes it is, and worse, it could be criminal.

Ten people, including four college basketball assistants, have already been charged for corruption acts including fraud and bribery.

First, what is a wiretap?

Likely, you have heard the term “wiretap” before — maybe in movies about the mob, TV shows such as “The Sopranos” or “Law and Order,” or in stories involving President Donald Trump. You also likely know it has something to do with the government listening in on phone conversations. The reality is that wiretapping can be done by anyone, at anytime, with just about any conversation — though it might not always be legal. In fact, it typically is not.

Wiretapping is a form of electronic eavesdropping accomplished by seizing or overhearing communications by means of a concealed recording or listening device connected to the transmission line that monitors telephonic communication. Either Dawkins gave the FBI permission to listen to the conversation and record it, or the FBI obtained a warrant to do it. As long as one of these occurred, then the FBI can use it and the recording is legal.

How did this come about?

This alleged evidence against Miller was uncovered during the three-year long FBI investigation into corruption surrounding NCAA basketball, coaches, agents and various sports companies for money being paid to coaches to point players in the direction of certain agents, financial professionals and clothing companies. Why is the FBI investigating college basketball? Well, several years ago the FBI made a policy decision to actively investigate and shut down public corruption. Since schools such as Arizona accept federal funds, any wrongdoing in connection with those schools can result in FBI scrutiny.

In September 2017, the U.S. Attorney’s Office for the Southern District of New York charged four NCAA assistant basketball coaches, including former Arizona coach Emanuel “Book” Richardson, under anti-corruption laws regarding fraud and soliciting bribes. But the investigation did not stop there and likely will not stop anytime soon. At the time, I bet every coach in the NCAA was trying to remember every conversation they have ever had about a potential player with someone outside their staff.

What could happen to Miller?

Again, nothing has been proven against Miller; but he could be looking at criminal charges similar to what his previous assistant coach is facing. This could result in fines and prison time. On the civil side, he could be looking at legal wrangling with the university over his job and contract, as the school could relieve him for breaking NCAA rules, even if any of his actions did not break the law.

What could happen to the school?

Criminally, nothing. However, with all the evidence gathered by the FBI, it would not surprise me if more UA employees could be pulled into this tangled web. If the allegations are true, do you really think that it was only Richardson and Miller who knew of these shenanigans? In the court of public opinion, Arizona will suffer. Already players are changing their plans to go to UA.

This is an unfortunate turn of events for Arizona, Miller and the NCAA, especially since the money-making March Madness is just around the corner. To be perfectly clear, nothing has yet been proven against Miller, the school or confirmed by the FBI. Best-case scenario, it is a false report. The worst-case scenario means you will be hearing more about the legal troubles for Miller and the school in the near future.